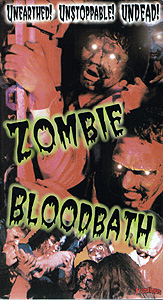 Plot: Zombies rise from an nuclear power plant (built on top of an Indian Battle Ground-oh no!) and attack Kansas.

Before I get to reviewing this, it's time for a history lesson. You see, in the 80's, we started to see really (and I mean really) low budget horror. Granted, microbudget horror is nothing new. People were churning out cheap exploitation made for crackerjack money back in the 60's and 70's. The 80's though, gave us a new device: the camcorder. That's right,now anyone could do their own backyard effort. Also, it should be known that the 60's-70's microbudget directors at least had some sort of experience in the business of film and television. The folks with camcorders though, didn't. If there is any consolation, the 1982 shot-on-video "classic" Boardinghouse received a theatrical release in Grindhouse theaters, and is watchable in a what the fuck did I just watch way.

The 90's were a dark time to be a horror fan. Sure, Scream came out and gave horror another chance, but it unfortunately lead to a series of poor imitators and inferior sequels, giving the movie some unneeded (but predictable) scorn from angry virgins. The Silence of the Lambs won Oscars, but Hollywood didn't want to call it horror, when it clearly was. Oh, and while there were still zombie movies, they were few and far between. So, that lead to the greatest catastrophe to come to horror from the 90's to this millennium(I think they ended in 2002): the Shot on Camcorder zombie movie. These movies offered something studio horror didn't offer: full on hardcore gore, sexual content, nudity, and zombie mayhem. Sadly, they were done by people with no experience whatsoever in the field of film making, which meant that they were all horrible in every conceivable level, and not in a so bad it's good way. I mean in a so bad it's bad way. Imagine watching somebody's home videos/home movies for about 80-90 minutes. There you go.

Now, on to our

Review: This is actually the first in trilogy of films from "filmmaker" Todd Sheets, who admits his movies are unwatchable. Instead of reviewing it, here's what you have in store:

I think you get the point. I've already suffered through it. Don't let it happen to you.

Rating: 0/10. You'd have more fun watching a home video of a colostomy than watching this. Avoid at all costs.