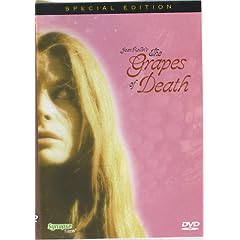 Plot: A woman finds herself trying to survive a French Countryside swarmed with the living dead.

Review: Prolific Exploitation autuer Jean Rollin's 1978 gem is actually his first in a trilogy of zombie movies: the others include the atrocious Zombie Lake and the surreal but good Living Dead Girl. However, "Grapes" is the best of the three movies, as well as the most coherent and conventional.

Fans hoping for graphic violence and bloodshed will be pleased with this movie. The eerie "just rotting" look of the zombies is effective, and we get plenty of nice gore, including a great bit involving a Pitchfork. There's also plenty of fog drenched atmosphere, and the requisite Rollin movie nudity, to make fans of horror happy. Especially effective is the way Rollin uses the desolate French countryside, creating a sense of menace and dread, which is accompanied by an excellent electronic score.

That out of the way, some will probably be turned off by the episodic feel of the movie, as scenes occur that may leave viewers confused. To me though,that's not a problem, as it adds to the nightmarish quality of the proceedings.

"The Grapes of Death" is both a classic Gallic horror movie and a classic zombie movie. See it if you want to get a gander at what Rollin was capable of.

Rating: 9/10 One of Jean Rollin's best movies, and a great, original zombie movie to boot.

Next Time: Horror Rises From the Tomb