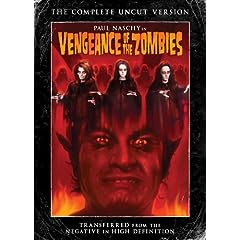 Plot: An Indian Mystic (played by Paul Naschy) uses black magic to bring hot topless chicks back from the dead to get payback on those who wronged him. Naschy also plays the mystic's brother, and Satan himself.

Review: Paul Naschy is the king of Spanish horror-not because of quality, but because he is a Lon Chaney jr./Boris Karloff like figure in how he was known for playing everything from Werewolves, Vampires, Demons-you name it.

The first of four Spanish tales of the undead to be reviewed this month, "Vengeance Of The Zombies" is a rather confusing-though quite campy affair. The movie throws in everything but the kitchen sink-the occult, Satan, topless babes, zombies, psychedelic imagery, and a wholly inappropriate Jazzy Lounge score more suited for Bachelor than a horror movie.

The movie, as you can guess, is hard to take seriously. However, as I also already mentioned, it's also rather confusing, as the kitchen sink approach ends up making you scratch your head at times, causing you to lose interest. Also, while the movie has plenty of camp appeal, it is hurt some by the occasional over reliance of exposition. A little exposition goes a long way, but too much is just annoying.

In the end, "Vengeance Of The Zombies" offers some sleazy delights, but ends up feeling like too much of a good thing, and ends up wearing out it's welcome. A better place to begin as far as Spanish Zombie movies are concerned would be Tombs Of The Blind Dead.

Rating: 5/10 I may be a big fan of exploitation and sleaze, but even though it had plenty of the right elements, "Vengeance Of The Zombies" left me feeling unfulfilled.

Next Time: The Living Dead at Manchester Morgue