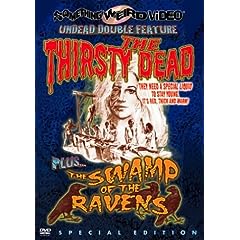 Plot: Dr. Frosta preys on Beggars and Gypsies so he can continue his work on the dead. When his girlfriend leaves him, things get pretty bad.

Review: A Spanish/American co-production, "Swamp Of the Ravens" is a good example of a meat and potatoes exploitation movie: it might not meet all the requirements, but it still has enough to count some.

The movie itself isn't that much of a zombie movie, as the doctor's failed experiments float and hang around the swamp. It's really more of a Mad Scientist movie, with plenty of evil doings and little if any zombie action. Also, there aren't many ravens in this swamp-there's a lot of buzzards though.

Still, the movie has enough sleaze and weirdness to make it watchable. This includes a little gore (including real life autopsy footage), nudity (including necrophilia-not that graphic though), a score that sounds like outtakes from a Yes album, and a weird lounge act with a ventriloquist.They sure don't make 'em like this anymore.

"Swamp Of The Ravens" is a decent time waster: it might not meet all of your hopes, but it's watchable, and has it's moments nonetheless.