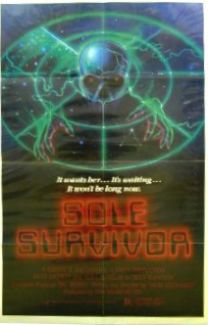 Plot: The only survivor of a plane crash finds herself being followed by the dead-to finish the job death planned for her.

Review: The plot may sound a lot like that of Final Destination, but that's where the similarities end. What we end up getting is an original, relatively gore free horror flick, and anunderrated zombie movie that owes more to Carnival of Souls than Zombi 2.

The most intriguing aspect of the movie is it's treatment of the zombies. These are not mindless, flesh eating hordes, or corpses brought back by a chemical leak or voodoo. These are a cruel parody of death, working for the reaper, and working with a serious purpose. They are quite creepy too, and bring forth an aura of serious dread and menace reminiscent of the dead found in underrated fare like Dead & Buried and Messiah of Evil. The acting is also strong, with Anita Skinner playing a convincing lead character.

Director Thom Eberhardt would go on to direct the more tongue and cheek apocalyptic zombie movie Night of the Comet, as well as Gross Anatomy and to a lesser extent, Captain Ron.

As it stands though, this is his best movie. It's now out on DVD thanks to Code Red (complete with linear notes by genre authority Stephen Thrower), and is worth your money. I recommend it.

Rating: 9/10 One of the best 80's horror movies you haven't seen, "Sole Survivor" is an underrated gem. Check it out.

Next Time: Night of the Sorcerers