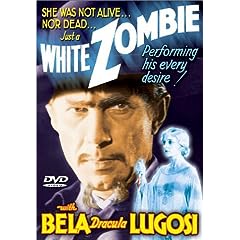 Plot: A young man turns to a witch doctor to get a woman away from her fiance. Instead, she becomes one of the living dead.

Review: There are many other zombie movies I could have gone with-"Fiend", "The Video Dead", "The Day it Came To Earth", and "Blood Diner" to name a few-but I think it's best to go with the first zombie movie ever made-and a nice little B & W horror flick to boot.

Apart from being the first zombie movie, the movie is also worth seeing for Bela Lugosi's great performance as "Murder Legendre", the witch doctor. Along with "The Black Cat" and "Dracula", this is one of Lugosi's best performances. The dead are also quite creepy-not shambling rotting corpses (this is the 30's for Christ Sake), but they are zombie none the less-though the hair on one of them is rather goofy, like something out of a 3 Stooges movie.

Granted, there are better Black and White Zombie movies ("Night of the Living Dead" and "I Walked With a Zombie"), but this is still a ice, atmospheric entry into the genre-and not hard to find, as it's in the public domain.

With that, "31 Days of the Dead" comes to a close. Will there be a part 2 next year? Maybe. Right now I'm not sure, as this has spent my energy and this has made the possibility of my other plan for August-"Month of the Maligned" null and void. Until then, I'm all zombied out. Still, I hope everyone who read this enjoyed it, and will give some of these a look.