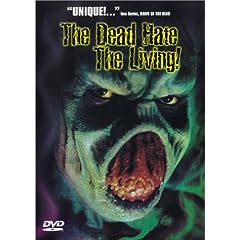 Plot: A band of would be filmmakers go to an abandoned hospital, and find a real dead body-which they use for the movie. It ends up opening a portal to hell-and unleashing some zombies.

Review: I make no apologies whatsoever when I say that I like the movie Scream. Sure, I may lose cred to some horror nerds, but I answer only to myself, thank you. I don't like though, what came after "Scream": A series of annoying, self aware horror movies that thought they were clever, but weren't. Case in point: "The Dead Hate The Living", released by the one interesting Full Moon Studios, is proof that a love for zombie movies does not make a good zombie movie.

The movie is full of references to other, better horror movies: Return of the Living Dead, The Beyond, Cannibal Ferox, to name a few-and while it's heart seems to be in the right place, it all comes off as fanboyish nonsense, which is essentially what it is. Not only that, it's bad fanboyish nonsense. The acting is non-existence, the references to Bruce Campbell and Fangoria are annoying, the soundtrack-filled with bad horror punk, psychobilly, and horrorcore rap-is grating, and the mugging for the camera hurts as well.

To be fair, the zombie and gore FX are decent, but they aren't enough to save this dreck from being any good.

Writer/Director David Parker would go on to write the notoriously bad House of the Dead (no, he's not happy with the way it turned out-can't say I blame him), and was originally attached to direct a Michael vs. Pinhead movie, though that movie never came to pass thank God. He also acted in the movie Free Enterprise, which is actually a pretty damn good comedy. Amazingly, when "Dead Hate The Living!" came out, some were praising Parker as one of horror's next big things, which shows how bad the shape of the genre was in at the time. After HOTD, his career never took off or fully recovered.