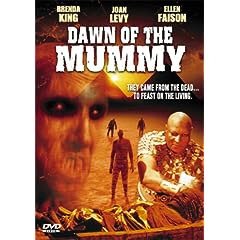 Plot: A group of supermodels disturb the sleep of a mummy, incurring it's wrath-as well as the wrath of the undead.

Review: Filmed in Egypt, this Italian/American co-production is a lot of things, but good isn't one of them. If anything, it's proof that not every Italian Zombie movie is going to be good (see also: Zombi 4: After Death; Killing Birds.) Thing is, unlike say, Hell of the Living Dead, this isn't even entertainingly bad. It's just mind numbingly boring bad.

The movie does offer some decent gore, but it's not until the last 15 minutes that the dead attack, and by then, it's too little, too late. You have to sit through atrocious acting and nothing notable happening. Also, the movie has characters who are supermodels, but none of them disrobe. Granted, it's hardly the first time an exploitation movie promised a lot but delivered little, but that's beyond the point. There's nothing interesting in the movie, and it feels too much like warmed over, reheated trash instead of entertaining trash. There's very little here that's interesting, while other Italian Zombie movies like Burial Ground and Zombi 2 remembered to bring the sleazy, gory goods.

"Dawn of the Mummy" is a waste of time for anyone and everyone involved, and isn't even worth watching drunk or stoned.

Rating:0.5/10 a very, very dull and painful viewing experience. Better than a shot on camcorder horror movie, but that's hardly a compliment.

On the table next: Hell of the Living Dead