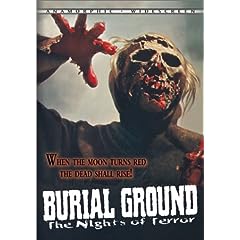 Review: Hardly the most obscure movie in the list, "Burial Ground" is considered a great example of Italian gore cinema done right: unbelievably sleazy, gory, and dumb fun with plenty of memorable moments.

The thing the movie is mostly known for is Peter Bark, a clearly 30 something midget who plays a mothers child (Casting director: "He's short, so nobody will know the difference!") who takes oedipal desires to really creepy new limits. He watches his mom get it on, feels her up, and in the moves conclusion, comes back from the dead and bites out a huge hunk of her tit. If this doesn't let you know what kind of movie this is, then wait, there's even more.

The thing that strikes me the most about the movie, is how unbelievably stupid the people are here. In the beginning, an old professor is approached by the dead, and exclaims "Please, I'm your friend!" Amazingly, this doesn't work. Later on, after several people who you don't give a shit about (really, these are unlikeable people) are killed and devoured by the dead, one character says "Let's let (the zombies) in the house! Maybe they don't want us, but something in here!"

So, how is the gore and make up FX. Well, they are great. Sure, it's obvious at times that they are masks, but the zombie make up and gore effects by legendary effects man Gino ("Zombi 2", "Cannibal Ferox", "Dune", "Living Dead at Manchester Morgue", "High Tension") De Rossi work. The dead are rotting, decrepit things, reminiscent almost of the zombies from the "Blind Dead" movies, only with maggots and worms infesting them. The gore is sloppy, messy, and nausea inducing. So yeah, it's great.

"Burial Ground" will hardly win any awards. It's unoriginal (lifting off of Fulci's "Zombi 2" several times) and poorly acted. However, it's still a lot of gory, sleazy fun, especially if you are in the right frame of mind.

Next Time: Night Of The Comet