"It's like the Miss TSM Tournament, but I make all the rules and do all the voting!"

This time, more than 1,000 girls from all over the world were candidates. I thoroughly vetted hundreds of them in order to narrow it down to this field of 64.

1. Girls only. The hottest girls. For the purposes of this tournament, only their looks matter.

3. The girls shall be famous. 'Fame' is defined as having 5+ pictures turn up on Google Images. (Disqualified: Leelee, local girls.)

6. Seeding is based on the approximate order of their level of fame. Upsets can and will happen.

7. Brackets shall be broken into four geographic regions: North (European descent), South (Latin America), West (North America), and East (Asia). Each bracket shall contain 16 girls who fit in that region.

* There's new emphasis on this rule this time. I call it the Autumn Reeser Rule, since she's one of many girls who is not nearly as attractive as her best modeling shoot would have you believe. I am judging the girls based on how they look when they go out in public—not how they look when they're retouched beyond the point of humanity in modeling pictures. I tried to use candid pictures, or at least ones that aren't completely over-the-top retouched. I'm not judging only by these pictures, anyway. It's best to watch videos of them.

8. Alyson Michalka (Ukraine) - Aly is just so cute. She looks like a younger Paulina Rubio. Gemma has huge tits but the model shots clean her up too much.

5. Denise Milani (Czech Republic) - I wouldn't pass up on these tits. Dillan is pretty good for someone with no chest.

4. Keeley Hazell (England) - Fairly decisive here. She gets retouched like crazy, but her face is naturally pretty good as well. And she has other good body parts.

14. Kayden Kross (Sweden) - Tough pick because neither is that great. I'll take the cute blonde.

10. Marina Orlova (Russia) - Hotforwords is hot. People think Miranda is cute as a button. It's about fuckin'.

2. Kim Kardashian (Armenia) - Ohhh man. Watch out for Kimmy K in this tournament. Amazing everything.

16. Melina Pitra (Argentina) - Mariah is still looking good, but not enough to beat this slut.

5. Alessandra Ambrosio (Brazil) - This matchup was winnable, but the adorable Camila just doesn't quite offer enough to pull off the upset.

6. Alexis Amore (Peru) - The face isn't perfect, but I'd take her over plain Perroni.

8. Lanny Barby (Canada) - She's very sexy with her raven hair. Sienna is kind of a mess.

4. Stacy Keibler (USA) - How the hell did the degenerate wrestling industry employ Stacy for so long? Also, Tawny is one of those girls who looks different in every picture.

3. Ashley Tisdale (USA) - It's a shame that this matchup happened in round one. Yes, I really put my emotions aside and judged that Ashley is better looking. Amber's face is a little off. Obama is a mack daddy!

15. Sarah Vandella (USA) - We've all seen Elisha's fabulously pale modeling shots, in which she is phenomenal. But, in reality, she is a rather unremarkable girl. Ms. Vandella is a good-looking blonde.

1. Vanessa Hudgens (Philippines) - This matchup was pretty close. Vanessa is really adorable though.

9. Ayesha Takia (India) - The East region is much improved this season. Nobody plays to win more than Indian girls do.

12. Aarti Chhabria (India) - Aarti is not quite as good as this pic indicates, but if Kaylani is the best Singapore can do, then I don't plan to visit Singapore.

11. Ursula Mayes (South Korea) - Ahyoomee is cute with her crazy eyes. But I'd definitely rather fuck Ursula. Total hottie.

7. Ramiele Malubay (Philippines) - When she dolls up with hair and makeup, she is good enough to win this rather dull matchup.

2. Koda Kumi (Japan) - Koda at her best is among the best Japan has to offer. Antara is a little too thick for me.

8. Alyson Michalka (Ukraine) - I imagine fucking her and thinking it feels good.

2. Kim Kardashian (Armenia) - Ok, let's not get carried away by a few amazing Kim pictures. Still, Marina isn't going to beat her.

16. Melina Pitra (Argentina) - Argentina is a powerhouse. I don't like that Somaya's looks change in different pix.

14. Belén Rodríguez (Argentina) - I want to plow it pretty hard.

8. Lanny Barby (Canada) - One of the most difficult aspects of this tournament is determining how attractive Lanny truly is. I really considered Paris here.

10. Raven Riley (Native American) - I like Sarah a lot. Raven is something special.

12. Aarti Chhabria (India) - I'm a bit underwhelmed by both of them, actually. Aarti gets me going more.

3. Sunny Leone (India) - On the contrary, this matchup is phenomenal. I hate to see either one go out. I'll tell you now that this matchup easily could have been the East region final. It's also an extraordinarily difficult decision. I just feel it more with Sunny.

8. Alyson Michalka (Ukraine) - There's no question that Keeley has the better body. People overlook how ordinary her face is. Aly brings me joy.

16. Melina Pitra (Argentina) - She is a deadly combo of being both a cute and a sexy girl, and it's not just in the retouched pics.

4. Stacy Keibler (USA) - Once again, when a girl never looks bad, you have to stick with her.

9. Ayesha Takia (India) - India is steamrolling through Asia. Ayesha continues to impress. She has no major flaws.

3. Sunny Leone (India) - Koda gets blowed out here. She maxed out in the Cutie Honey video. Sunny ensures complete Indian domination in the East.

16. Melina Pitra (Argentina) - At first, I thought Melina was all retouch. But, when she dolls up, she really is that amazing. I had a strong first impression of Rocío, but she's a bit too plain.

10. Raven Riley (Native American) - It's good that these girls don't have bad days. Stacy, however, does have ordinary days. Raven looks the same all the time: sexy.

3. Sunny Leone (India) - Ayesha had a good run. She can't compete with Sunny, though. The difference in sexiness is apparent.

16. Melina Pitra (Argentina) - It was a really tough choice again. Lucy is extremely pretty. But, without the tits, she's similar to Stacy Keibler in her ordinariness. Melina is sort of like what Ashley Tisdale would be as a supermodel.

3. Sunny Leone (India) - Raven is competitive here. She just doesn't have the goods that Sunny does.

3. Sunny Leone (India) - Argentina vs. India is my ideal final matchup. We also have blonde vs. raven hair. Take a look at Melina's best look and

. Both are marvelous. But, with Melina, I have a little bit of doubt. With Sunny, I have no doubt. India plays to win. Her prize is that she replaces Ashley Tisdale as my desktop background. 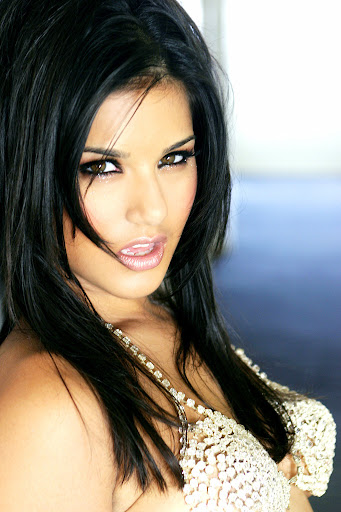