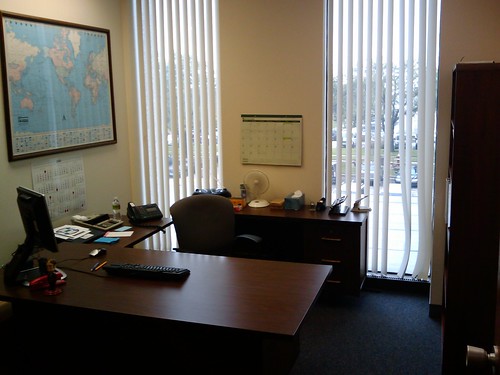 I don't normally blog too much about office happenings because that can be dangerous in these days of employers using the interwebs to keep track of their employees when they’re not being unproductive at the office.

However, this is a big day, for today's post is the first from my new digs as I have moved out of my cubicle home(s) of 7+ years and into a real office with four walls, a couple windows, and...a locking door!

Does this mean that I have crawled through the river of shit that is the DAMN HUSSEIN ECONOMY and come out smelling of roses with a promotion that comes with bigger pay, a fancy title, and the tiniest shred of power via a single thin line on some company organizational chart?

So what happened? Get comfortable; this could be a long entry if I put in all the details. The events are real, the names may or may not be changed.

A brief bit of background to our story: I spent the first six years of my time here working in the general accounting department, mostly doing account reconciliation and audit response. In 2005, my manager was forced to take this one lady, Doe, into our group because Doe’s previous position in the payroll department was eliminated and she needed to find a new home. Why wasn’t she ‘let go’ like most other people whose jobs are eliminated? Because Doe’s mother is a senior accounting manager here. Eh, whatever. I know that’s the way things go sometimes. I accept this…in most cases.

The problem here? Doe is a completely worthless employee.

Within two months of starting work in our group, we all despised her because the rest of us—the ones that actually showed up to do our jobs each day—were constantly having to put up with her enormous amount of drama and bullshit AND cover her substandard work. This was made even worse for me early in ’06 when I was put in charge of reviewing/approving her work each month but was not given any supervisor/managerial authority to deal with her.

My manager, Sandy, responded to Doe’s poor work by refusing to give her any promotion or any raise beyond the company mandated ‘minimum living adjustment’ (usually 1-2%), which you get only unless you’re about to be fired or something. Things continued this way until the end of ’07 when management did a little shuffling of the deck chairs, resulting in Sandy going to manage another finance group and me getting shifted over to the project accounting group.

I was free! I still had to see her every day (the ones she’s actually here anyway), overhear her inane conversations, and deal with the constant noise—but at least her poor work no longer directly affected my ability to do my job. I even got to move to a different cubicle around the corner from where her and her pals all gathered for their daily social club meetings, eliminating some of the distraction. It was almost as good an office situation as one could hope for…

…and then Michaela, who did the tax work for the general accounting group—and whose office was directly across the hall from my new cube—recently left to go work for the corporate tax group. Who was anointed to take over her work? You guessed it!

So Doe started sitting across the hall from me on the days she was doing the tax work. She asked John, the new boss of the general group—apparently a competent accountant but completely inexperienced in dealing with Doe—if she could move into the office full time and was told ‘no’ because she is classified as an associate accountant—the lowest accounting rank we have—and that it was not necessary for her to sit there all the time. Doe was PISSED because she isn’t used to not getting her way.

So she rebelled by sitting in there a couple of extra days. And then a couple more. And then, before John knew (although those of us who know her know what she was doing), she had established a nice squatter’s existence in the office.

The problem? The noise was even worse than before because now she was armed with a speakerphone…which she used—at max volume—for every single goddamn call she placed or received. And I mean EVERY DAMN CALL.

This prompted myself and the two other old school guys—who are also not in John’s group—that sat in the same hallway as Doe to complain to John about the noise. We strategically spaced out our complaints over the course of two weeks so it didn’t look like we were all dumping on her at once. I was the last one to complain and was told by John that he had asked her to move back to her assigned space but that she had refused to do it but that he was going to act soon.

So here’s a quick multiple choice of John’s possible actions regarding this situation:

A) Reprimand her via formal written notice to HR

B) Choice ‘A’, along with getting our real estate services department to clean the stuff she had moved into the office out, return it to her assigned cube, lock the office, and leave instructions for security that that office was not to be unlocked without their consent

If you said, ‘E’, you are correct. Unfortunately, there is no prize.

So here I sit, out of cubicle hell in office #224. It’s great because I don’t have to see or hear Doe if I don’t want to but, more importantly, it’s a quiet, professional atmosphere.

At least I can read TSM in peace now. I just hope that no one can hear me continually laughing at the sheer absurdity of moving 6 different people around—and having THREE people who have nothing to do with your group sit with your group—just so you don’t have to deal with one headcase. God bless middle managers.