• So I was never into the whole YouTube deal. See small videos on my computer. Whatever.

Boy was I wrong.

Now I started warming up to this web site when TSM began allowing video tags into posts, but what sealed the deal for me was when I learned you could rip music from music videos and save them as MP3.

Now I can re-live all my old-school rap tapes. Yeah, boooooy.

In just minutes I have re-established one of the greatest sides of a cassette tape there ever was. What set of songs am I talking about? 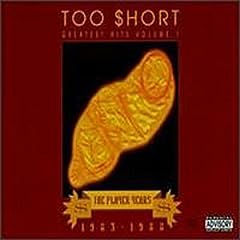 Aw fuck yeah. A two-tape collection of Too Short's material before he signed with Jive records. The A side to the first tape in this package is one of my all-time favorite set of songs. Now let me take a trip down memory lane [/biz Markie]

Invasion of the Flat Booty Bitches

Forget about Mexicans, you don't want your town to be invaded by a bunch of Miss six o'clocks (straight up and straight down). Let's experience the horror

The day my story made itself

Every bitch I saw was flat as hell

I told myself I must need glasses

Where's them bitches with the big brown asses

Me and my group just wanna be tough

Every two blocks I seen a bitch

But that ain't nuthin but a cat

None of them bitch didn't have no ass

Wait on the bus, some was walkin

Me and my homie just started talkin

I said, oh, she looks good

He said that ass is flat as wood

I said what about Vicky in the black

He said, Short, she's all that

Invasion of the Flat Booty Bitches

The Invasion was on...

Every single day of the week

For every nigga livin there's a freak

If you've got game and a bed

Why not get f**ked and get some head

'cause bitches all over wanna get worked

I just need one with alotta turf

Me and my homie, rollin and smokin

I told my homie, I hate to say

All the bitches with booties stayed home today

And he said Short, what now?

Put the pedal to the metal and hit the B-Town

Nearly 10 minutes of deep lyrics about the social commentary of urban America during Reaganomics. Common, the Roots and Q-Tip ain't got shit on this.

And bitch, you're just a bitch. You work fast food and think you're rich.

Are we starting to pick up a trend with these songs? Too bad this song gets cut off at the end because the best line is at the very end (see the bolded text).

Rap so strong to the disco beat

Talk about bitches who ever licked

More then once, more than twice

It was hella times and it all was nice

You see me nut, when I look down

And you looked up and see me frown

Cause your one bitch Ill never fuck

Do you know why, because you suck

She's a vicious head doctor with a p.h.d.

Lick my balls 'till my dick gets harder

Tell a little story on the microphone, bitch....

You say you love me but is that true.

You axed me could you be my lady

You wanted so much to have my baby

So what bitch? I bust your cherry

Hell fucking no I don't want to get married

Cause can't no bitch hound me

Talking some shit about a family...

...sounds vaguely familiar that's because it should be. I quit counting how many times I've heard this verse on his other albums. And God bless him. From selling tapes with Freddie B. in high school to millionaire.