So you retired from coaching to focus on ministry stuff. Best of luck to you, bro. I have always been a huge fan of yours. How much of a fan am I? If Tony was ever to find KK's Korner and read some most all of the stuff I post here, I might actually feel ashamed of myself. ... I said "might."

For as much as a Dungy fan I am, I will say this: He should have been fired from Tampa Bay. I remember when the Bucs got rid of him all the ESPN talking heads, among others in the sports reporting biz, were shouting OMG RACSIM BLAHBLAHBLAH~! Fuck that. It was the right move. Did Tony turn a joke of a franchise into a contender? Yes. Was he able to get this team over that hump to advance in the playoffs? No. Bringing in the asshole-ish Gruden got the Bucs a Super Bowl win in his first year. Of course, that's all he's done, but would you rather have one Super Bowl win or none? And when Dungy was fired, I said to those who would listen (all three of them, and they had no choice because we were all at the same bus stop) that he'd get hired again and all would be right with the world. Turns out I was correct. And now both Dungy and Gruden are unemployed.

Now before you think I just point out my correct predictions, I'll provide equal time for something I was way off base on this past NFL season: I thought Matt Ryan was a poor draft selection for the Falcons. Happy now?

• So I was flipping through channels today and noticed that CNN is having nine hours of coverage on the "Osama Express;" his choo-choo ride from wherever to D.C. And then I saw some promo for cBS television on "Yes We Can Monday" that featured the cast of "Two-and-a-Half Men" getting that Soviet-style red/blue portrait President Hussein's followers plastered all over the country. Just for shits and giggles, I wonder if I can find this anywhere. Well that only took one Google search, and half a cyber-kettle of tea brewed. 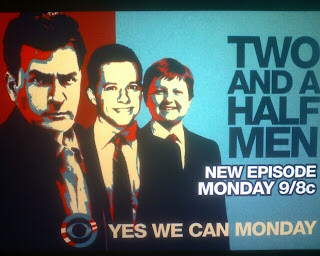 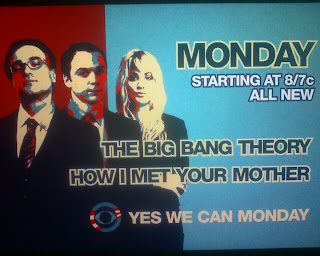 On a side note, at what age does that kid have to be in order for the show to no longer be called "Two-and-a-Half Men"?

• And here I thought shooting for "Notorious" wrapped up months ago.

Police said someone was shot in the stomach after an argument on opening night of the movie Notorious B.I.G at the Grande 18 at Four Seasons Station in Greensboro...