• So four years ago when W. got re-elected a bunch of commie queers decided to take pictures of themselves with messages saying "I'm Sorry" to the rest of the world for who won the election. 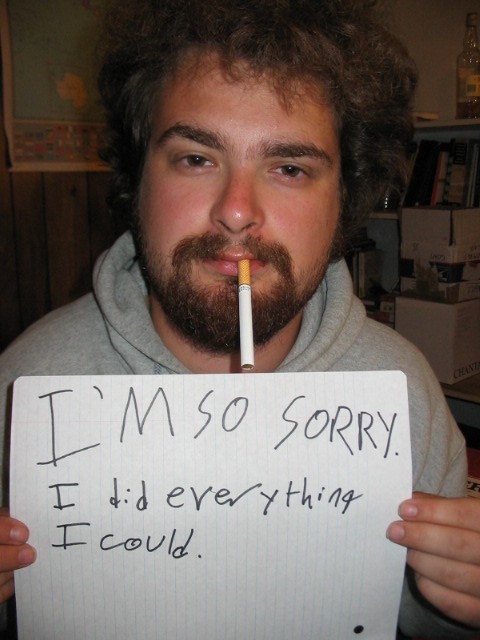 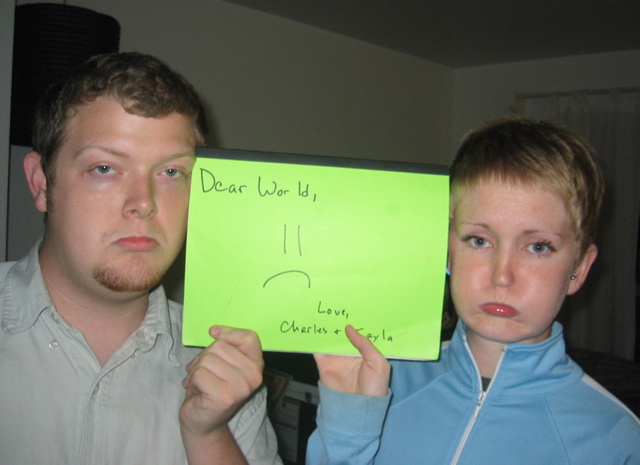 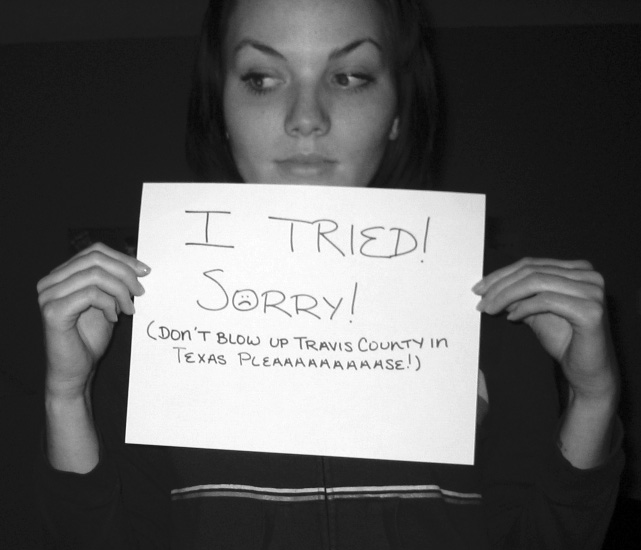 This of course brought on the other side with a bunch of "I'm Not Sorry" pictures and hilarity ensued. Why am I talking about this? Because here we go again:

Oh, but wait, now we're all supposed to come together and circle-jerk:

And "my side" is engaging in this happy horseshit as well:

Yeah, I bet there would be all this "come together" garbage if McCain would have won instead of Osama. I'm sure all you 52ers would be going "Now's the time to come together" and other Koom-bay-ah shit.

But even though I QUESTION MY LEADERS IN WASHINGTON because I'm a PATRIOT, I guess I could give this "come together" pseudo-unification a try. Here we go...

Sorry, but Max isn't much into bipartisanship.

However, Max is one hell of a PATRIOT~!

• While I'm on the topic of QUESTIONING OUR LEADERS IN WASHINGTON, I also feel it's my PATRIOTIC DUTY to question our leaders in Medium-Large Media. With some reporters literally breaking down in tears on Election Night in joy of who won, will these protectors of the Fourth Estate be barred from any future relations with this administration? I think any journalistic credibility they possessed has just been flushed down the toilet, if it hasn't been already.

And haven't you been doing everything you can to make "this new presidency work" for the last year-plus?

And what's better than the video, the comments:

MEANWHILE, FOX NEWS has been so in the tank for neocons since at least 1992, and was free campaign press for Bush and McCain. So please, SPARE ME.

From Wiki, and my own memory:

The channel was created by Australian media mogul Rupert Murdoch, who hired Republican political strategist Roger Ailes as its founding CEO. The channel was launched on October 7, 1996 to 17 million cable subscribers.

Hey, Chris, you know how to make a new presidency work? YOU QUESTION THEM. Why? It's your PATRIOTIC DUTY. Oh, and you also remove the first letter of the President-Elect's middle name from all keyboards on Capitol Hill. That brings people together as well.

• So Shittburgh's local left-wing rag's Sunday edition has yet another literary masterpiece from its editorial section. This time it's about gunz! The same topic I spoke about yesterday.

The economy is sputtering and the stock market is gyrating, but there's one sector of the economy that is experiencing a surge, thanks to Barack Osama's victory in the presidential election. Across the country, gun sales are reportedly booming.

Who knew that paranoia could be such an economic stimulant? As The New York Times reported Friday, gun owners are stocking up on handguns, rifles and ammunition because they fear Mr. Osama will curb their rights of gun ownership. "He's a gun-snatcher," the Times quoted a gun shop owner in Houston as saying. "He wants to take our guns from us and create a socialist society policed by his own police force."

Admittedly, not all gun buyers currently opening their wallets are likely to be infected with such a level of right-wing hallucination, but even at the fringes this impulse is not logical. Guns were hardly an issue for Mr. Osama during the campaign, and his infamous comment about people who "cling to guns and religion" was a ham-fisted way of expressing sympathy for those in depressed rural areas, not a contemptuous promise to change their ways.

Gun owners survived the Clinton administration and they will survive the Osama administration. Earlier this year the U.S. Supreme Court for the first time defined gun ownership as an individual right, not a collective one, a ruling that would be binding on any president. Regardless of what might be proposed in the way of new gun laws, the basic right will remain inviolate.

Mr. Osama preached nothing but moderation on the campaign trail, despite Republican efforts to twist his words. He is also smart enough to know that he will be a one-term president if he really could gut the Second Amendment.

The United States is a free country and it will remain a free country. People are free to flock and buy guns if they want to, but this boomlet is no more sensible than the run on duct tape at another paranoid moment in recent memory.

Listen up you ivy-tower fuckheads. Want to know the reason why some people are buying up firearms? It's because that U.S. Supreme Court case you point out in your piece of shit editorial passed with a 5-4 decision. That means all it would take is one additional red diaper doper baby to be appointed for this to go the other way. Odd how you didn't bother to mention this. Oh, and Osama IS ANTI-GUN. I know it's hard for you to see this since you're on your knees slobbing his knob, but that's why you have PATRIOTS like me QUESTIONING OUR LEADERS.

And speaking of questioning our leaders, I have to seriously question the judgment of Mr. Osama once I read this:

President Bush and President-elect Barack Osama are probably hoping their meeting Monday goes better than their first get-together, which left a bad taste in the mouths of both men.

Four years ago, Osama and other newly elected members of the Senate were invited to the White House for a breakfast meeting with Bush, who pulled the young Chicagoan aside.

"Osama!" Bush exclaimed, according to Osama's account of the meeting in his second memoir, "The Audacity of Hope." "Come here and meet Laura. Laura, you remember Osama. We saw him on TV during election night. Beautiful family. And that wife of yours -- that's one impressive lady."

The two men shook hands and then, according to Osama, Bush turned to an aide, "who squirted a big dollop of hand sanitizer in the president's hand."

Bush then offered some to Osama, who recalled: "Not wanting to seem unhygienic, I took a squirt."

OMG, W. uses hand sanitizer. Yeah, because it's not like he doesn't shake many hands throughout the day. (Hmmm, "not"/"doesn't" -- does that double negative cancel out? Who knows, who cares.) Hell, I bet if W. didn't use hand sanitizer and Osama ended up with the sniffles a day later he would write in his memoirs that GEORGE W. BUSH TRIED TO KILL HIM WITH BIOLOGICAL WEAPONS~!

The president then led Osama off to one side of the room, where Bush said: "I hope you don't mind me giving you a piece of advice."

"Not at all, Mr. President," Osama told the commander-in-chief.

"You've got a bright future," Bush said presciently. "Very bright. But I've been in this town awhile and, let me tell you, it can be tough. When you get a lot of attention like you've been getting, people start gunnin' for ya. And it won't necessarily just be coming from my side, you understand. From yours, too. Everybody'll be waiting for you to slip, know what I mean? So watch yourself."

Bush then noted that he and Osama had something in common.

"We both had to debate Alan Keyes," the president said. "That guy's a piece of work, isn't he?"

Osama laughed and even "put my arm around his shoulder as we talked," he recalled, although he added the gesture "might have made many of my friends, not to mention the Secret Service agents in the room, more than a little uneasy."

Despite this display of bonhomie, Osama said the president's demeanor turned downright frightening when he laid out his agenda to the freshly minted lawmakers.

"Suddenly it felt as if somebody in a back room had flipped a switch," Osama wrote. "The president's eyes became fixed; his voice took on the agitated, rapid tone of someone neither accustomed to nor welcoming interruption; his easy affability was replaced by an almost messianic certainty. As I watched my mostly Republican Senate colleagues hang on his every word,...

Just like the lemmings that stand there awestruck when you are reading from a script? But wait, there's more.

...I was reminded of the dangerous isolation that power can bring, and appreciated the Founders' wisdom in designating a system to keep power in check."

Boy, that's a good thing to know. Hey, what's this?

President-elect Osama plans to use his executive powers to make an immediate impact when he takes office, perhaps reversing Bush administration policies on stem cell research and domestic drilling for oil and natural gas.

John Podesta, Osama's transition chief, said Sunday Osama is reviewing President Bush's executive orders on those issues and others as he works to undo policies enacted during eight years of Republican rule. He said the president can use such orders to move quickly on his own.

"There's a lot that the president can do using his executive authority without waiting for congressional action, and I think we'll see the president do that," Podesta said. "I think that he feels like he has a real mandate for change. We need to get off the course that the Bush administration has set..."

First he mocks the wife of a dead president, now he's offended by basic hygiene. I wonder if he's going to wash his hands after his last shit leading up to Inauguration Day? If not, I sure wouldn't want to be the next President to put his/her hand on that Bible. (I was going to make a "maybe he'll use a Koran instead" remark, but I'm doing my best to be bipartisan in these uncertain times.)

If questioning your leaders in Washington makes you a traitor, then call me Benedict Arnold.